I am so pleased to present, in partnership with the BC Movement Arts Society, two of Vancouver’s rising female dance makers, Livona Ellis and Rebecca Margolick. Last season we had planned to feature them in a program of solos also including Mary-Louise Albert and Vanessa Goodman, but we were forced to pivot at the very last minute due to new pandemic restrictions and stream the show online. Subsequently Rebecca and Livona continued to work and create throughout the pandemic, taking the opportunity to create Fortress, their first collaboration together, and I am very pleased to be able to finally share their solos as well as this new work with you in person in our theatre at last. I look forward to continuing our partnership with BCMAS as we work to support the development of BC’s contemporary dance scene and its presence on stages across our province.

BC Movement Arts is launching its new North Island Contemporary Dance Series, featuring Canadian and international dance artists. I’m delighted that Livona Ellis and Rebecca Margolick kick off this new series right after their shows at The Dance Centre. Bringing urban and rural together, BC Movement Arts is one of the few professional dance organizations based in, and serving, rural and remote communities in Canada. This inaugural year, of what will be an annual dance series, spotlights acclaimed dance artists from British Columbia, New York, England, and Finland.

I am so pleased to partner with The Dance Centre for this additional special co-presentation of Livona and Rebecca’s FORTRESS + 4 SOLOS. This wonderful opportunity to perform at The Dance Centre, (just before they head up for BC Movement Arts’ 1st shows of the series in Sointula, Port McNeill and Alert Bay), allows not only for increased performing opportunities for these wonderful dance artists, but for the sharing of their superb and versatile artistry with Metro Vancouver audiences.

A journey of one, arriving or leaving, listening to memory that is gently propelling what is next for her.  Inspired by the painting of the same name by Mona Hamill.

The work is about the resilience, strength, and relentless pressure on the female body over generations. Bunker + Vault was influenced by the archival research I did on the women residing at the The Clara de Hirsch home for Working Girls from 1899-1950 in New York City. The work has toured to Costa Rica, France, Mexico City, Portland, Montreal, NYC, Vancouver, Wells B.C., Singapore (Online only).

We can place imaginary limitations on ourselves and when one sees a friend surpassing real challenges, you are given an opportunity to rethink the word ‘impossible’ and your relationship to the concept. A tribute to an old friend.

There is the wish for this re-imagined solo that this work of memory of persecution was just a source of history uncovered, but unfortunately with the rise of fascism and anti-Semitism world wide, it is as relevant today as it was 20 years ago.

This project was inspired by a number of conversations we have had together. In Fortress we look at the ways in which women and matriarchs have been pillars in our family. We relate this idea of a fortress, a stronghold, something impenetrable, with the specific vulnerability and strength required to carry out that multilayered roll. We look to the women in our family that have been the most selfless and most generous and had the most ferocious sense of self. We play with the boundaries of sharing weight as a representation of burden and external pressure and the idea of leading and following to explore the constant redirecting and decision making in life.

This iteration of Fortress is a work in progress and we will be developing it into an evening length piece.

This piece was created through a residency in Sointula, BC supported by BC Movement Arts Society and with rehearsal space support from The Dance Centre. Thank you.

Peter Bingham is the Artistic Director of EDAM and is one of the pioneers of Contact Improvisation, a dance form that emphasizes flow and the cooperative exchange of weight between partners. The “touch and tumble” of Contact is a hallmark of much of Peter’s choreography, lending both athleticism and graceful elegance to his partnering and ensemble work. He has created over 50 choreographed works and performed in hundreds of improvised performances in theatres, dance festivals and universities across Canada, the United States, Europe and Asia.

Livona Ellis was born on the unceded territories of the Coast Salish Peoples: Sḵwxw̱ ú7mesh (Squamish), Stó:lō and Səlíl̓wətaʔ/Selilwitulh (Tsleil-Waututh) and xʷməθkʷəyə̓ m (Musqueam) Nations. She completed her training at Arts Umbrella under the direction of Artemis Gordon. In 2010 she received her Dance Diploma and began dancing with Ballet BC. Throughout her 10 seasons with the company she has been fortunate to perform works by world-renowned artists such as Crystal Pite, Sharon Eyal, Lesley Telford, Company 605, William Forsythe, and many others. Independently she has collaborated with Jennifer McLeish-Lewis for the EDAM Spring Series, Rachel Meyer and Jennifer Mascall for Dancing on the Edge Festival 2019, and Mary-Louise Albert and Peter Bingham for Solo Dances 2020/21.

Livona has performed in international venues such as Sadler’s Wells, Movimentos Festival Wolfsburg, Jacob’s Pillow Dance Festival, Fall for Dance NYC and North, and International Dance Festival Birmingham UK. She has created works for Dances for a Small Stage, Dance Deck Trois, Public Salon 2019, Contemporary Art Gallery Gala 2018, and Arts Umbrella Season Finale. In 2017 she received the Vancouver Mayor’s Arts Award for Emerging Artist. In 2019 Livona staged Medhi Walerski’s Prelude on Staatsoper Hannover in Germany. Livona was also a guest artist with Konzert Theater Bern in Switzerland for their 2019/2020 season. Livona is currently on faculty at Arts Umbrella and is also one of the Programming Advisors for the BC Movement Arts Society. She will be sharing an adapted version of her work The Valenced Other at Left of Push in January 2022.

Allen Kaeja is an internationally recognized and award-winning choreographer and dance film director, who has created over 180 stage works and choreographed for 28 films. Allen is Co-Artistic Director of Kaeja d’Dance with Karen Kaeja. His stage and film works have been featured in commercials, films and festivals around the world. He has received numerous national and international commissions, teaches Kaeja Elevations and dance film master classes worldwide. Allen co-developed many site-specific and audience interactive engagement performance strategies with Karen over the past 30 years. Allen and Karen recently completed performing/teaching in Japan, Singapore, China, Israel, across Canada, Mexico, USA and the UK. Allen was very excited creating with director Keira Loughran, choreographing Wendy and Peter Pan until COVID closed Stratford Festival. Allen and Karen are creating for their upcoming 30th anniversary next year and have recently received the Dance Ontario Lifetime Achievement Award and are finalists for the Toronto Arts Foundation 2020 Celebration of Cultural Life Award.  Allen has completed principle shooting of his 29th film, FALLOW with Karen Kaeja, and is so honoured and excited about the re-imagining and premiere of Trace Elements, danced by the incomparable Rebecca Margolick in Vancouver.

Rebecca Margolick is a Canadian dancer and choreographer based in New York. Her multi-disciplinary and solo works have been presented in France, Costa Rica, Singapore, Poland, Mexico, Bulgaria, Israel, and in various places in the US and Canada. She was named one of Dance Magazines Top 25 to Watch in 2021. Her solo Bunker + Vault won the Jury Prize for “best indoor choreographic work” at the 2019 Festival Quartiers Danses in Montreal and is currently touring. She was selected for the 2020 New Directions Choreography Lab Fellowship at the Ailey School and was a Dance Artist in Residence at The Banff Centre for the Arts in 2019. She was a 2020/2021 artist in residence at the Dance Deck in Vancouver. She was a 2017 Movement Research GPS Fund Artist in Residence at Derida Dance Center in Sofia Bulgaria, and a 2015/16 LABA Fellow at the 14th St Y in NYC. She has been commissioned to create works on Ballet BC’s Performance Project, Ailey/Fordham BFA Program, Michiyaya Dance, and DancePORT Derida,

Rebecca is currently a dancer and rehearsal director of Chuck Wilt’s UNA Productions. As a freelance dancer she has worked with a number of artists, most recently Kayla Farrish/Decent Structure Arts. She has worked with Witness Immersive, Allen Kaeja, Hannah Epperson, Patricia Norowol, Jerome Bel (The Show Must Go On), Derrick Belcham, Emily Terndrup, Maya Orchin, Shay Kuebler, and Barak Marshall, among others. She was a dancer with Sidra Bell Dance New York from 2012-2016.

Rebecca trained at Arts Umbrella in Vancouver and graduated from NYU Tisch School of the Arts, with a BFA in Dance. She is an Artistic Associate of BC Movement Arts Society and is a proud member of Dance Artists National Collective.

The Dance Centre is grateful for the generous support of
The Choreographer’s Circle, Anndraya T Luui and the BC Arts Renaissance Fund.

The Dance Centre acknowledges that it is located on the traditional, ancestral, and unceded territories of the xwməθkwəy’əm (Musqueam), Skwxwú7mesh (Squamish), and Səl’ílwəta?/Selilwitulh (Tsleil-Waututh) Nations. It is an honour and a privilege for us to be guests in their lands. We are grateful. 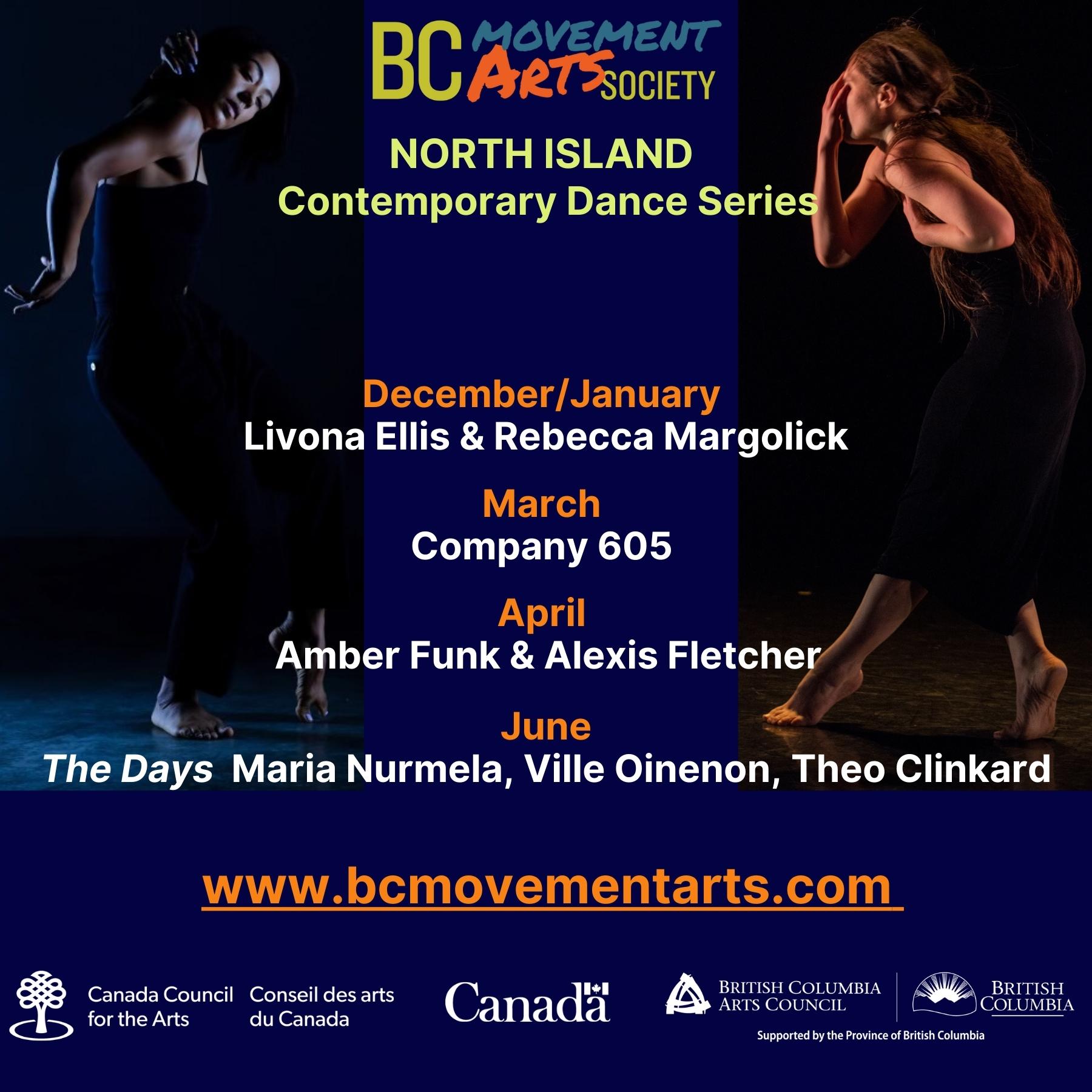