This summer we’re partnering with Dancing on the Edge Festival to present glint, a not-your-usual triple bill of works by Vancouver artists Erika Mitsuhashi, Francesca Frewer and Alexa Mardon. Each piece is in a different stage of completion, and invites the audience into a unique context for experiencing the work.

Erika’s work-in-progress on the cosmic shore is multi-media installation in a studio. Francesca’s new solo When I Think It Has Yet To Begin will be performed to small audiences in the theatre. Alexa’s research a crisis/a party will be an open sharing of group scores alongside one-on-one dream readings for audience members on the patio at sunset.

We caught up with all three artists to find out more.

Erika Mitsuhashi: on the cosmic shore

The initial inspiration for this work came from a desire to scratch an artistic itch I’ve had for a while, which was to create an installation/performance space and to explore my emerging material practice. I have been curious about bringing my choreographic approach to other mediums, especially scenography, as a way to draw performers (human and non-human) and the audience’s attention to the materiality of a space and ultimately the materiality of the present. I have also been excited by a slow drifting movement quality that creates a feeling of a different relationship to gravity and time. I had often thought of all the performers moving in a cosmic space and the title of the work is inspired by Carl Sagan’s poetic explanation of the rhizomatic network we are all a part of and the humbling largeness of the cosmos in which we are just on the shores of.

Audiences will be invited to play with an expanded idea of who or what a performer is. By offering this frame and the invitation to move around the installation, watch from different angles, to stay and go as much as they’d like, I hope for the site for movement or dancing to be discovered in unexpected places – in the light refracted off reflective materials, in the bodies of the performers and in the attention/spatial discoveries of the audience. There will be a durational score for the human performers that will loop, moving through a couple different ways of being in relationship to one another, the audience and the non-human partners including the sculptures, projection design by Daniel O’Shea, sound by Adam Asnan and the space of the Birmingham Studio. 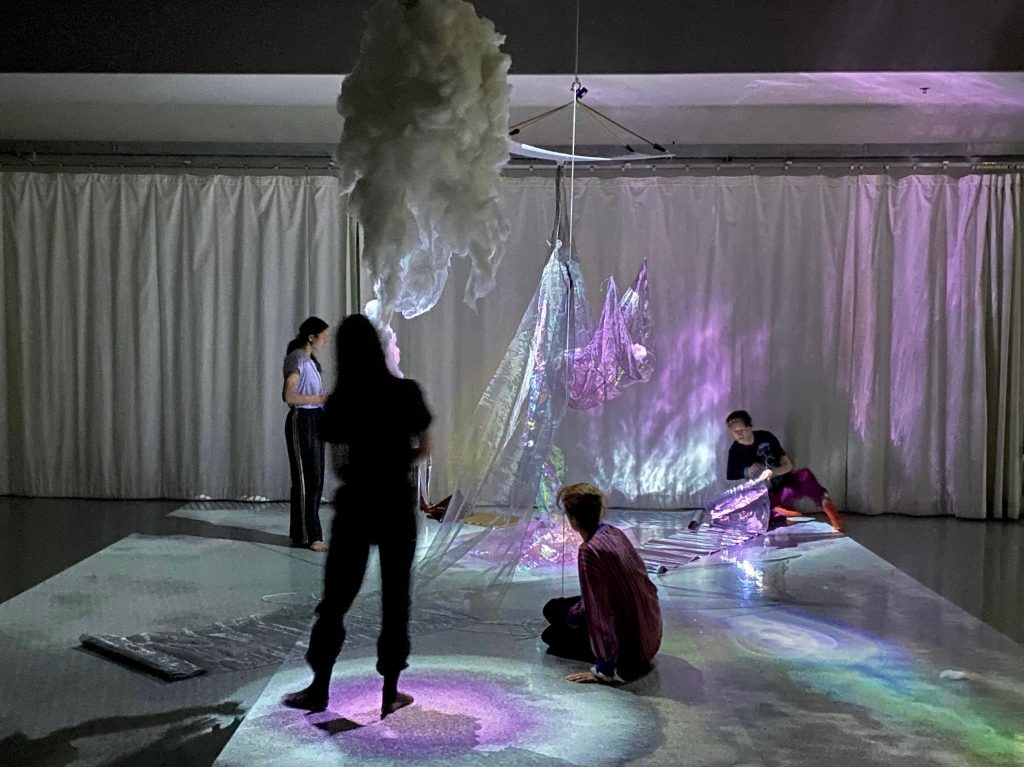 Francesca Frewer: When I Think It Has Yet To Begin

This process has been a new way of making work for me. My idea started as a simple formal interest, and I have been surprised to discover that it hasn’t changed all that much despite two surprise extra years to work and stew and dream on it. Normally my ideas shift drastically as I work on something. I often find that by the end of the process, I’ve had to let go of some of the things that really excited me at the beginning because they are no longer true to what the piece has become. This time, I am actually finding the opposite: the evolution of the idea has been slow and gradual, and rather than having to let things go along the way, I’m discovering that more of my interests are already embedded in the work than I realized initially.

During the pandemic, I also found myself missing my friends in the dance community, so I decided to work with a group of dancers, one-on-one, for one rehearsal each. Ten dancers joined me to try out the score I was working with, and to create a phrase of choreography that is now part of the score that I will perform. Each of these wonderful artists helped me move the process along, see it from different angles, asked insightful questions, and brought their own unique self to the work, which was a true gift. I really cherish what they so generously offered, and am so grateful for the light at the end of the tunnel that appeared each time I got to spend a few hours with someone in the studio during that difficult time. 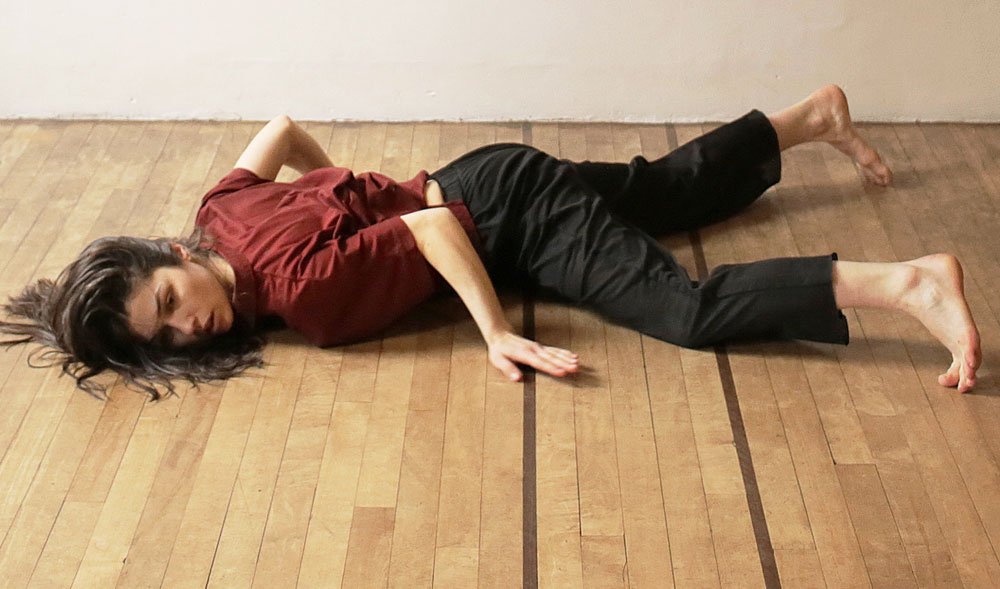 In fall 2020 I invited nine dance artists to write their dreams in a shared google document, as often as they wanted, as a way of connecting across distance and isolation. I missed dancing with people, and while sharing dreams wasn’t exactly dancing, I learned that it felt like the kind of imaginative, indirect intimacy that dancers share when we are working, training, or sharing practices together. The “dream archive” as we began to call it, became a pool of images, messages, and questions that we began to draw from to create scores for each other.

Eventually, the dream archive became a pared down ‘rolodex’ of selected images which we began using in a reading practice: asking questions about our lives, pouring wax into water, and reading the shape of the wax along with pulling a dream ‘card’ from the rolodex, to interpret and play with language and meaning and a kind of channeling. This practice was always only online, and until recently, it was only practiced for and with each other.

This summer will be the first time we conduct these readings in person, for participants outside the group. While we will spend a week all together in the studio in July dancing and doing readings together, it still remains to be known how literal dancing might or might not appear  in this iteration of the research sharing. Somehow, being connected across the matrixial dream space feels a lot like dancing together, and dancing together might feel a lot like dreaming. I’m excited to have almost the whole group together for the first time, to feel what this kind of intimacy we have shared in writing brings to a rehearsal process.

The audience can expect a casual reception space where they can hang out, have a drink and a snack, and take a look at some of the materials we’ve been working with, and chat with some of us. There will also be 1 on 1 readings happening outside, during which performers will rotate in and out of the role of reader/witness/dancer. If you sign up for a reading, you can expect a collaborative and guided encounter with a performer who will use wax, water, and the dream rolodex to sense and talk through a question you’ll bring to them, with you.

The plan was always for each of us to share works in different stages of completion, this process felt like it arrived very slowly and organically over the last two years – there was no solid plan or intention to make a “show” per se, but rather, to see what practices might emerge, and to share them. 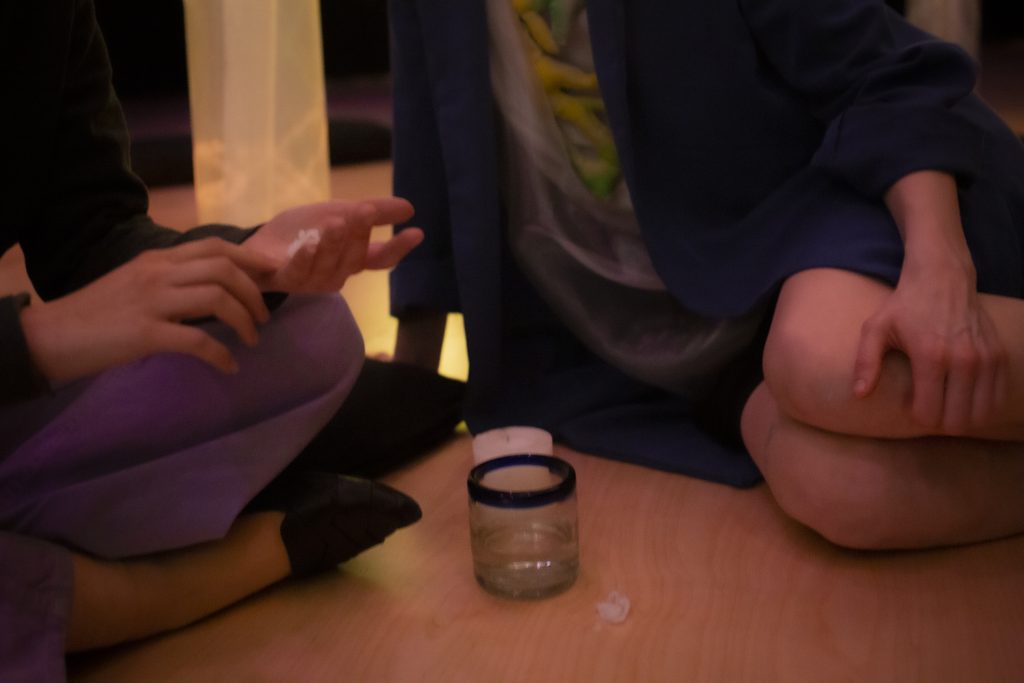