The Architecture of Scotiabank Dance Centre

This season we are celebrating the 20th anniversary of our building, Scotiabank Dance Centre. Architect Noel Best worked closely with Arthur Erickson on the facility: here he shares some insights into its design. An exhibit of the text, drawings and images compiled by Noel is on display in the main lobby of Scotiabank Dance Centre until October 2021.

The Dance Floor: the sine qua non (without this, nothing)

At Scotiabank Dance Centre, this issue was made more complex by the multiple groups that would be using the studios – some in pointe shoes, others in slippers, still others bare­foot or in flamenco or tap shoes. Working with Jay Gower Taylor, a former Ballet BC dancer and a specialist in dance floors, a unique design was developed for each studio, with mock-ups subsequently tested by a representative cast of dancers. The result was a resounding success. It is said that the Inuit have more than twenty words to describe the different qualities of snow. Similarly we, the architects, were intrigued by the various words the dancers used to describe these floors – warm and intimate, being two.

The Dance Centre and the Heritage Bank

With Scotiabank’s gift of the site, the immediate, and contentious, design issue was how much of the original bank building to retain.

To achieve all the spaces requested in the building program – 33,000 square feet of studios, offices and support space – the full footprint of the site, plus the maximum allowable height of 90 feet was required so retaining any of the interiors was simply not an option, however, the team looked at a number of scenarios for retaining the façade, whole or in part. 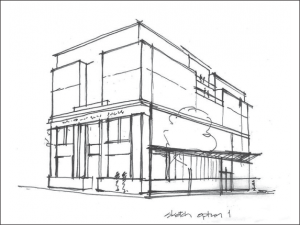 One of the most attractive features of Scotiabank Dance Centre is the top floor studio. Rather than having the administration on the uppermost level, the conventional solution, we wanted to give the prime users of the building – the dancers – the benefit of the light and view and of the adjacent rooftop terrace. Over a portion of the terrace we provided a glass roof for sun and rain protection. A secondary but important consideration was the studio and terrace could be used together for meetings and receptions.

The glass canopy, a quarter of a circle, is suspended from a single column in the corner of the terrace. However, each triangular segment has a progressively larger radius – providing a dynamic sense of movement, evocative of a dancer moving through space.

Immediate analogies for this design were Marcel Duchamp’s painting “A Nude Descending a Staircase,’ Eadweard Muybridge’s classic photographs of figures in motion and, in a more contemporary vein, a dancer captured in the frozen frames of a strobe light.

In the end, faced with the dichotomy of the staid neoclassical façade and the free and lively nature of the Vancouver dance community, the design team elected to retain just the Granville Street façade – as a dramatic ‘Piranesi’ fragment – almost like a bit of a stage set – while the Davie Street frontage, light, contemporary and transparent, became the defining image of the Dance Centre.

The usual way to understand a building’s organization is a review of the floor plans.

However, for the Dance Centre design, a more revealing study is the building section – a vertical cut through the building rather than a horizontal – like a slice through a layer cake.

Each of the six studios requires a unique ceiling height, commensurate with the room size. These heights vary from 11 feet to 26. By carefully nesting these studio spaces together, along with the attendant service spaces, we were able to achieve the building program within the maximum allowable building height. So, a vertical slice through the building at one point reveals a building of four stories, at another point five, and another seven.

In 1988, the architectural commission for the design of the new Dance Centre was awarded to Arthur Erickson Architects, with Noel Best as the project lead. When Erickson subsequently closed his firm, the commission was transferred to Architectura, Best’s new company, and he continued to work together with Erickson through the duration of the project. Best then became Principal in Stantec Architecture, an international design firm that acquired Architectura in 2003.