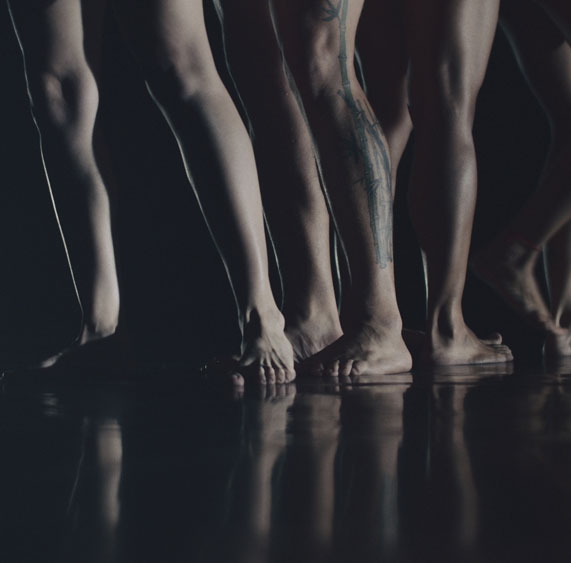 Daina Ashbee’s latest work unfolds like a ritual celebration dedicated to the body. In a minimalist landscape driven by cycles of change, five dancers fluctuate between possibilities: from animal to human, mundane to spiritual, from pain and sorrow to ecstasy. Down on all fours, they experience the elation of a new harmony and equilibrium but soon are flipped upside down, eluding gravity, and portraying a resurgence of the power to act in a community. Born in Nanaimo, BC and of Métis and Dutch heritage, Ashbee has earned international plaudits for her radical and unflinching work which examines the body through a powerful feminist lens.

This performance takes place in the round and has a limited capacity.

J’ai pleuré avec les chiens (Time, Creation, Destruction) is Daina Ashbee’s first group piece. Created before and during the pandemic, it went through the setbacks generated by it and then took shape again. The piece has incisive, sober precision and poetics of explosion and trance that we recognize as the signature marks of this choreographer.

Multiple, openly naked, bodies – female bodies, male bodies – track through various states with chants, attempts at rapprochement, stacks on all fours, and lines of flight. From the rupture emerges the connection.

From the sounds produced by the bodies emerge the movements which, in turn, generate rumblings, yelps, tears, calls.

Far from illustrating or representing, the performers are embodied, transmitting like channels of flesh. Myriads of lived stories crystallize into living corporeal states of being.

The creative process began with the exploration of a sensation: seeking solace in the embrace of one’s dog, howling with this companion species¹. This process then evolved into a dive into canine body states. What has emerged from it today does not oscillate between animal and human, the bodily and the spiritual, the feminine and the masculine, nature and culture, suffering and care, anchoring and air. No, dichotomies and dualisms do not interest Ashbee. The notion of essence does not challenge her either: She thinks of the world as a weft of potentialities where everything can coexist, well beyond the binary.

J’ai pleuré avec les chiens (Time, Creation, Destruction) shapes a ritual of cohabitation and decompartmentalization – a constellation of possibilities that escapes confinement in a category, a genre, a territory, circumscribed affiliations. Everything there is transitory, fugitive.

Experience the piece by leaving analytical categorization in the cloakroom and open the way to sensory experience: that of a space where beings and things can continually transform. This is not a temporary disruption, but a reconfiguration of the sensible². In this, Ashbee’s work is anti-colonial. The colonial and capitalist relationship to the world is not only material where territories and bodies are to be conquered, classified, possessed, and exploited, but also cognitive and sensitive³. The colonial perspective considers the arts, knowledge and, in general, what makes up the world as commodities to be acquired and categorised. J’ai pleuré avec les chiens (Time, Creation, Destruction) constitutes a refusal of the ways of knowing, creating, and feeling that are marked by colonialism.

All performances and events will be presented with COVID-19 protocols in line with public health advisories, to keep audiences, artists, staff and volunteers as safe as possible.